It’s hard to believe that it was just a year ago That Kid, alongside his online bff’s Slayyyter and Ayesha, collabed on the frenetic electropunk pop banger called Dial Tone. That single dropped out of left field like a neutron bomb and ignited an underground contagion that immediately began to transform the world around each of them.

It was truly a Big Bang moment: a blitzkrieg bop that smelled like teen spirit, it came rocketing out of the underground. The song quickly connected with a very specific slice of the underground pop audience in a major way, and it turns out that we internet pop scenesters have amazing, culture-defining taste, because That Kid and his cohorts suddenly found themselves at the center of a subcultural zeitgeist.

I’ve said it a million times before: everyone who heard Dial Tone when it debuted last fall  suddenly wanted to make a single of their own. It is difficult to overstate the impact this plucky little single made, and I believe its influence is still being felt. This trio of cool kids made the act of knocking out an instant underground pop classic seem easy and inevitable, when the reality of course is quite the opposite. True pop success is a carefully crafted illusion, and these three artists had pulled off their first successful magic trick!

One cycle of our sun later, we find ourselves on the eve of the next era within this whole crazy movement that Dial Tone helped to ignite. Slayyyter is about to drop her debut full length debut, which is one of the most hotly anticipated releases this year. And she chose That Kid, also known as Spencer, as one of only two credited features on this hotly anticipated project.

This could mean That Kid is finally about to be a hot pop commodity in his own right, and it feels a bit overdue. Slayyyter is a gifted pop artist and deserves the recognition 2019 has afforded her so far, but I can’t help but feel frustrated that our beloved That Kid is something of an unsung hero, lacking in that same attention from trendy online outlets. Although he has his own distinct, dreamy synthpop style, That Kid definitely occupies the same subcultural pop scene as fellow shiny computer pop superstars such as Slayyyter, Dorian Electra or LIZ. I worry this is evidence that queer artists of color continue to have to work twice as hard to get ahead in the worlds of media and PR–and that just means that people like me and you need to give them twice the energy in terms of support to help get them where they need to go!

Fortunately, That Kid has steadily developed a sizeable audience of his own over the past few months through sheer songcraft, determination and charm. He has continued to deliver bop after bop unto his ever-expanding legion of fans, complete with a very cute color schema dedicated to each mini-era. Spencer also remains one of the most good-natured, career-focused artists in the underground pop world. In a scene sometimes noted for its dramatic disputes and personality conflicts, That Kid always rises above while keeping it real. Others can stay pressed, because That Kid is the true embodiment of the Live Más philosophy–and it serves him well!

Earlier this year, Spencer became one of my first underground pop star pen pals. In other words, if you are just now learning about That Kid, please go back and check that interview out! Since then, he’s delivered a series of effusively effervescent electropop bops. From Booty Call to Rocket to Blindfold to Arcade, his discography is filled with bouncy, brilliantly crafted pop confections. Each song truly sparkles (thanks in part to the always on-point artwork from his brilliant visual collaborator Glitchmood).

Spencer’s voice is sugary-sweet and he is particularly equipped for conveying classic bubblegum emotions, particularly the feelings of yearning and exhilaration that stem from romance. That Kid is imbued with star quality that absolutely oozes from his charismatic vocal delivery, his craftily constructed hooks, and his warmly engaging social presence.  Plus, he’s a consummate team player. When he isn’t fronting his own projects, he is frequently collaborating as a songwriter with fellow queer musicians–check out the cheeky, clever nouveau underground classics like Kyunchi’s Regina George or CXLE’s Calabasas for further proof of his skills.

This felt like the perfect moment to catch up with That Kid, and see just what he’s been up to the past few months, and what we can expect from him next! Check out the interview below, and then join me in lighting a candle and speaking into existence That Kid’s total pop domination in the next year to come!!

BUNNY:  What was the most That Kid moment of your summer?

THAT KID: The most That Kid moment of the summer had to be when I opened for Slayyyter at the El Rey! I was definitely the most in my element at that show! It was sold out so I was so pumped. Getting the crowd to chant “Fuck me” was like amazing. I got so much good feedback after the show. 500 out of almost 800 people were early and there at my set. It was a really special night. It just felt like a really big party honestly!

BUNNY:  you had planned an album (the now-mythical Dial Up Diaries), then seemed to scrap it and instead kept us well-fed with singles all year. but now a mixtape is coming soon, right? can you take us on that journey of your decision making process? why did you decide not to release the album, how did you pick which singles to release and which ones to save? is dial up diaries gone for good?

THAT KID: A big reason I scrapped Dial Up Diaries was just because I didn’t really feel like it was the right time for me to release an album, and I honestly love the idea of just releasing monthly singles consistently to really grow more of an audience. I wrote Booty Call around the time when I wasn’t entirely sure if I wanted to release an album anymore, so that song kind of pushed me to go the singles route! After that, I made all of the purple singles the months they came out and they were completely brand new tracks that weren’t part of the original release. 2 more songs from the scrapped album are coming out as singles though! I sold and scrapped everything else from the project and for a fresh start. I’m in the early stages of making a new mixtape and I’m just in the right head space to do it this time around!

BUNNY: everyone is sooo excited for you and slayyyter to reunite on e-boy, from her mixtape dropping today! obviously you worked together on your legendaric song dial tone, but can you tell us the inside story of how you were chosen to be like, the ONLY new feature on her hotly anticipated record? that’s a big deal!

THAT KID: E-Boy came together really quickly actually! Around July, like a week or two before our show, she sent me a re-worked demo with an open verse and asked me if I wanted to feature on it. I wrote my verse in 15 mins and sent it over a couple hours later! Slayyyter is one of my closest friends and  has always been incredibly supportive of me so the whole thing felt really natural. I’m really excited for people to hear that song and honestly her entire project is just so next level.

BUNNY: which is your best song that starts with the letter B? (i’ll tell you if you answer wrong lol!)

THAT KID: My best song that starts with B is Blindfold! I love this argument but I really believe it’s Blindfold! We love a good sad emo dance pop banger! (we do, but sadly I must say the correct answer is Booty Call. no wait, it’s Boyfriend. Wait, nevermind, they are all the correct answer! –Bunny)

BUNNY: even tho u are super friendly and sweet to your fans, there are sometimes these nasty trolls who come for you (especially stans of one artist in particular mmhmm but i won’t name names). how do you deal with that kind of negative attention from people who attack you for literally no reason other than the fact they are bitter, jealous and misguided? do you have a self-care routine? we all want to make sure you are staying mentally healthy and protected!!

THAT KID: I think now I handle negative attention much better. It’s gotten to the point where it’s kind of funny and I can laugh about it. I get a lot of love and a lot of people do stick up for me and look out for me so it doesn’t really bother me anymore. If I get overwhelmed I usually just vent about it to a friend or unplug from social media for a day or two.

THAT KID: Everyone is so fascinated by Taco Bell! It’ll be on the mixtape. It still needs some work but it’s such a cute and silly song. It’s perfect because I actually did have a super cute date at a Taco Bell. My go to order is usually a crunchwrap supreme, a baja blast, and cinnamon twists. However I do love a good chalupa and you really can’t go wrong with their hard shell beef tacos!

BUNNY:  your singles are kinda grouped by the cover of their artwork. which is the most powerful That Kid color?

THAT KID: I think the most powerful That Kid color has yet to be discovered but so far I really feel like it might be purple! The purple singles are my favorite. I feel like I came into my own with those singles and aside from the music, I look incredible with purple eye shadow.

BUNNY:  which artist would you most like to work with most? please speak it into existence here

THAT KID: This is always a tough question because I’m working with some really fantastic people right now on some sick collabs and I just love collaborating in general. If I had to pick though, I’d love to do something with Ravenna Golden, Baby Perigosa, Namasenda, Dorian Electra, and Graveyardguy! Also Kim Petras! She followed me on Twitter a couple months ago and I’d love to write something with her.

BUNNY:  what is the next thing we can expect from That Kid?

THAT KID: You can expect 3 more singles, a couple collabs, merch, and maybe a little surprise before my birthday (New Year’s Day!) and a mixtape in February/March. So definitely stay tuned.

BUNNY:  Finally, congrats on the one year anniversary of the underground smash hit dial tone!! what’s the biggest lesson you have learned from that experience?

THAT KID: Thank you! I learned to just have fun with this whole music thing and take it day by day. Keep going and turn down your gain on your microphone! It helps a lot with the quality lol!

Stream That Kid’s discography, and I am sure I don’t need to remind you to check out E-Boy, his collab on Slayyyter’s debut mixtape! 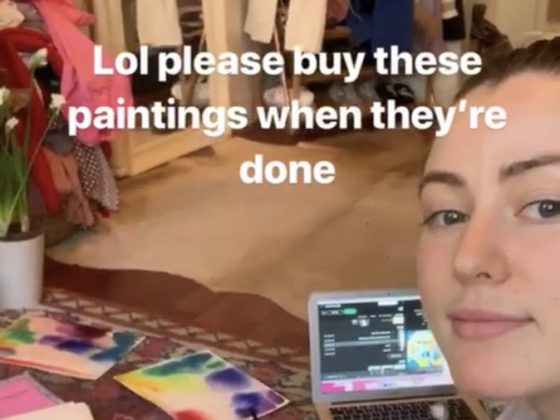 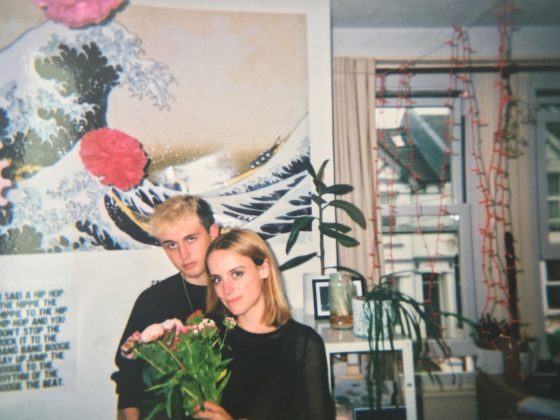